Fixed the issue: Security settings do not allow this Mac to use an external startup disk: when downgrading from macOS Big Sur to Catalina

2 weeks ago, I did the system update to install Big Sur on my work laptop. Running Selenium tests in Chrome was really slow and tests failed all the time.

It took about 4 mins to login to our portal. Very Slow. When using Safari to hit our portal, I got the same result.

Since this is the work laptop, I decided to downgrade from macOS Big Sur to Catalina. I watched many YouTube videos. This video is pretty good.

I followed the instruction, but I got the following screenshot. 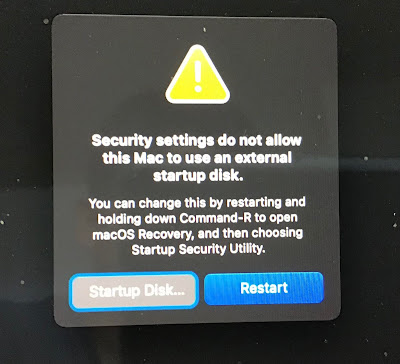 After looking into the issue, it was easy to fix it.

Went to Utilities -> Startup Security Utility. Logged into my credential.

Changed to Medium Security and chose Allow booting from external or removable media. 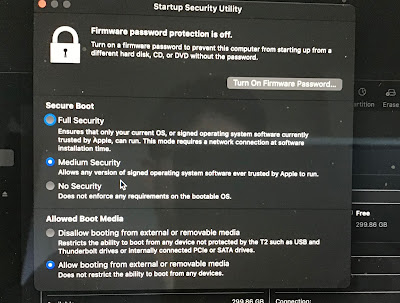 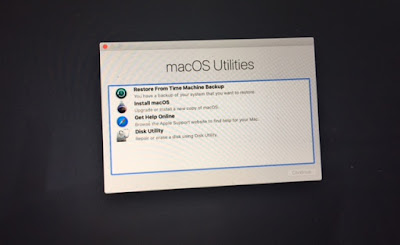 After installing Catalina, I set up everything for my Selenium Tests. Running the tests is very fast in Catalina, but not Big Sur. I am very happy to say that I “upgraded” from macOS Big Sur to Catalina on MacBook Pro successfully.
Posted by Ray at 4:00 PM No comments:

How to do automated accessibility tests in Selenium?

Today one person asked me about how to do accessibility tests in Selenium.

I remember after I joined this team, we used Chisel Web Selenium to scan the page directly in Visual Studio. However, we could not know if this test passed or failed locally.

Once we deployed to DEV/PPE and ran the tests, some test failures appeared in the Azure release pipeline (in accessibility tab). Resetting the baseline could ignore the failures.

In September 2019, we were told that Chisel Web Selenium was deprecated in August 2019 and we needed to move to Selenium Axe as soon as possible.

At that time if we used Selenium Axe, all tests failed in Visual Studio directly. Since this is the new model, we need to exclude the known failures.

Here is the good example(TestAccessibilityOfPageExcludingKnownIssues ) to show how we needed to update the code.

How to test localization using Selenium?

Today someone asked me about how to test localization of the Portal using Selenium. This is the good question.

For example, if we want to test in Spanish, we can just add lang= ‘es-ES’.

When you run the test, the Chrome window will be launched in Spanish. Is that simple?

The following 6 languages are not supported in our React Portal because it still shows English.

Last year I opened the bug to bugs.Chromium.org. Finally, they closed it and status was “Won’t fix”.

If you see the same issue above, do not feel surprised.

CloudTest: No error message appears in the Azure Pipeline if data-driven tests fail.

Our team at Microsoft decided to use CloudTest framework to run Selenium Tests against React Portal in Azure Devops.

I have developed many localization tests. Today I saw many failed, but there was no error message showing up in the release pipeline and it was hard to debug. 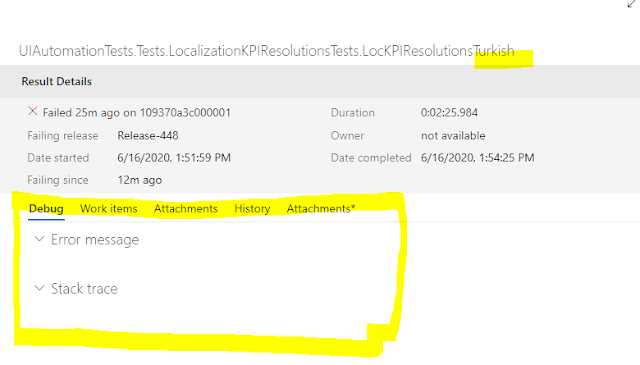 I posted the issue in Stackoverflow.microsoft.com where everyone working at Microsoft can post the questions.

The dev in the CloudTest team replied and said the main issue is that these tests are data-driven tests, and they are not handling the results (especially the way they are reported using InnerResults) correctly while parsing trx files. They have created the work item to track this request.

Hopefully this feature can be finished and deployed shortly..

Fixed the issue in Azure Pipeline: session not created: This version of ChromeDriver only supports Chrome version 80

We deployed to Canary on May 19 in the Azure Pipeline. When running all UI automation tests in the pipeline, all failed.

Here is the following error message in each test.

After looking into this issue, here is my note.

·       Google Chrome or Microsoft Edge Chromium version 82 is skipped due to COVID-19 pandemic.  The latest version is 83.

·       The Cloud test framework we use in the Azure pipeline is always installing the latest version of Chrome. Therefore, the Chrome driver 80 or 81 was not supported in Chrome 83. There is no Chrome driver 82 and it is required to use Chrome driver 83 to run the tests.

·       On May 19, I did not see the Selenium.WebDriver.ChromeDriver V83 in NuGet Package.There is no way to update it.

In order to know the test result as soon as possible, I need to manually download the Chrome driver 83 and updated the code in Visual Studio 2019.

After updating it and running all tests in my machine, all passed.
Posted by Ray at 10:00 AM No comments:

Our team at Microsoft tried to get the latest data of the browser percentage from our customers in  Azure Portal. However, I don’t see the ‘New Edge” in client_Browser column.

Does Azure capture browser usage for the new Edge?  The answer is no at this moment.

It is easy to repro:

Here is the query. 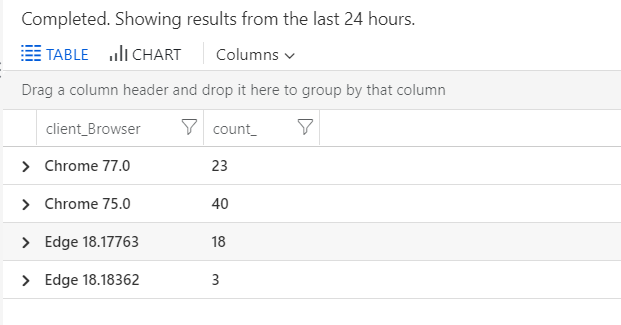 I don't see "New Edge" appear.  I sent the email to Azure Monitor DL and one guy opened the bug for me. Hopefully this issue can be fixed soon.

How to fix the error of VsTest Test Platform folder was not found in cache in Azure Pipelines?

Today I noticed that the log in UI Automation Tests had the error in the pipeline: VsTest Test Platform folder was not found in cache.

After looking into this interesting issue, we were not sure why Visual Studio test platform installer was disabled for this release. 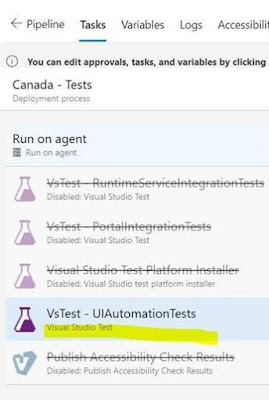 After we enabled it and re-ran the tests, all tests passed.

How to run all tests except one test in Azure Pipelines?

Last Thursday, I noticed that one UI automated test failed in Canary in Azure Pipelines. After looking into this issue, it happened in all environments.

Previous situation: When we hit the portal, marketing landing page appears. Clicked Sign In button. The login page was open in another tab.

Current situation: When we hit the portal, marketing landing page appears. Click Sign In button. It is remaining in the same tab and is redirected to the login page.

This change was made by our marketing team and it looks more user-friendly. But it made one UI automated test failed and it was not the shipping blocker.

I fixed it in Dev. In this case, we do not want to re-deploy test code to PPE-Canary again because it is really time consuming.

I talked to my release engineer that we should exclude this test in the specific release pipeline for reporting purpose since everyone knew it. He totally agreed to what I was saying.

In test filter criteria, we added the following one and re-ran the tests. All tests passed.

How to let hundreds of E0434352.CLR errors disappear in Azure Pipelines?

We have noticed that when running UI automation tests in the Azure Pipelines, hundreds of E0434352.CLR errors appeared in the log. They looked so ugly. Finally we found it is still a bug in Azure Devops. 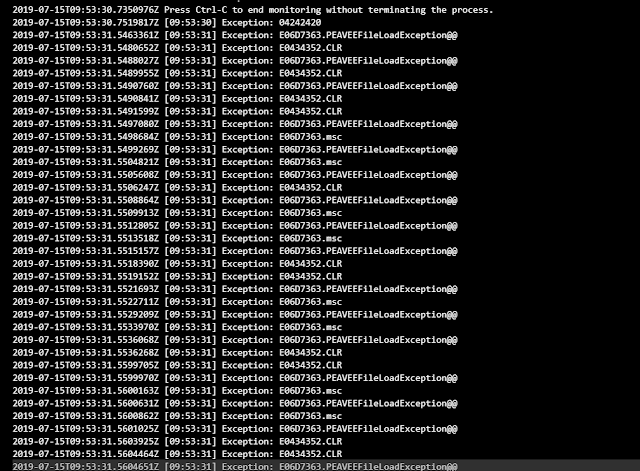 After doing some research, our release engineer unchecked “Collect advanced diagnostics in case of catastrophic failures” and triggered the tests again. All E0434352.CLR errors in the log were disappeared. 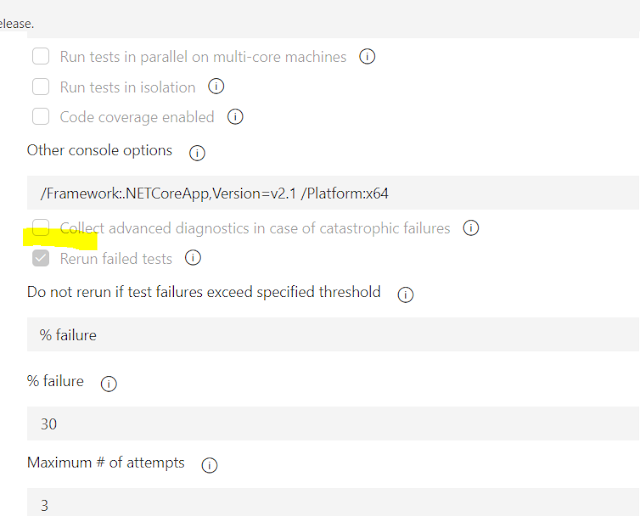 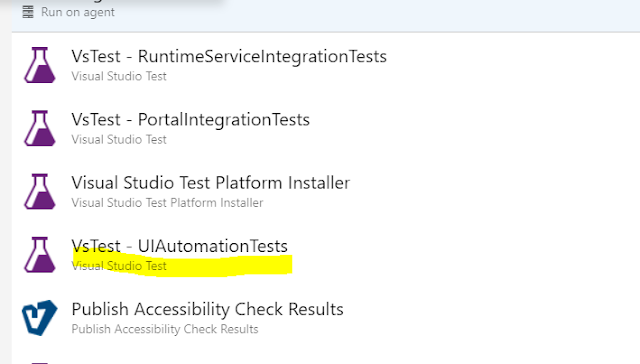 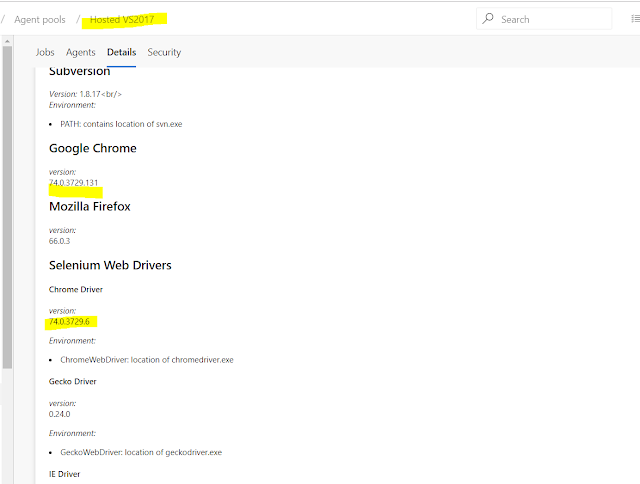 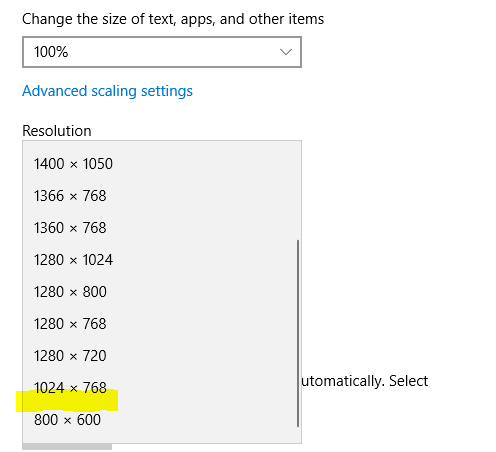